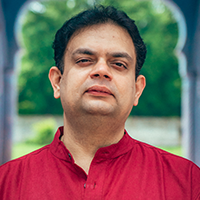 Yatindra Mishra is a celebrated Hindi poet, music and cinema scholar. He has four collections of Hindi poetry, several books on Indian classical music and cinema and translations. His book Lata: Sur-Gatha won six awards in 2017, including the prestigious 64th National Film Award for Best Writing on Cinema (Swarna Kamal) and the MAMI Mumbai Film Festival Award for Best Writing on Cinema, 2016-17. His latest book, Akhtari: Soz Aur Saaz Ka Afsana, is based on the life, times and music of Akhtari Bai Faizabadi Aka Begum Akhtar. He is currently working on a book on eminent lyricist, poet and filmmaker Gulzar Saheb.

The language of music transcends all other languages. Yatindra Mishra’s book, Akhtari: The Life and Music of Begum Akhtar, has been sourced both from the original English and translations from Hindi. Akhtari Bai Faizabadi, or Begum Akhtar as she was better known, was among the greatest Indian singers of the last century. An anthology steeped in essays on her life and music, as well as remembrances by those who knew her well including icons such as Bismillah Khan, Kunal Ray, Lata Mangeshkar, Rita Ganguly, Saleem Kidwai, Shanti Hiranand, Sheila Dhar, Shubha Mudgal, Yogesh Praveen, Yunus Khan and others along with interviews with the legend herself. Mishra and Maneesha Taneja have woven together an ultimate tribute to this doyan of ghazals. In conversation with celebrated author and screenwriter Anu Singh Choudhary, they take us on an evocative journey through the life and times of an extraordinary woman.