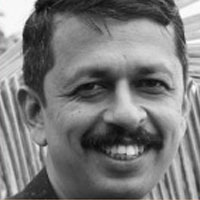 S. Hareesh is the author of three short-story collections, Adam, which received the Kerala Sahitya Akademi Award, Rasavidyayude Charithram and Appan. He is also a recipient of the Geetha Hiranyan Endowment, the Thomas Mundassery Prize and the V.P. Sivakumar Memorial Prize. Moustache, Meesha in the original Malayalam, is his first novel. Hareesh is also the author of two screenplays, Aedan, which received the Kerala State Award for best screenplay in 2017, and for the 2019 film Jallikattu, which premiered at the Toronto Film Festival and won a Silver Peacock at the International Film Festival of India.

Here he comes, Moustache of Kaipuzha

S. Hareesh and Jayasree Kalathil in conversation with K. Satchidanandan

Originally published in Malayalam as Meesha, S. Hareesh’s Moustache is a novel of epic dimensions and a contemporary classic mixing magic, myth and metaphor. Here, the Hareesh and his award-winning translator Jayasree Kalathil speak with the renowned poet K. Satchidanandan about the work's deep roots in the history, geography, politics and folklore of the Kuttanad region, and how the fabulous is sometimes the truest way to depict real lived experience.