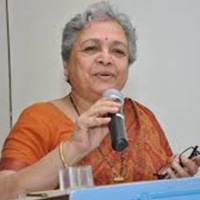 Mrinal Pande was born in 1946 in Tikamgarh to Shivani , a well known Hindi author and Shukdeo Pant , an educationist . She was schooled in Nainital and graduated from the University of Allahabad where she studied Sanskrit , ancient Indian history and English literature. Pande has also studied classical Hindusthani (vocal) music under eminent Gurus and drawing, design and history of art and Architecture at the Corcoran School of Art, Washington DC .
Mrinal taught at the Universities of Allahabad , Delhi and Bhopal before switching to journalism in mid 1980s . She has edited well known Hindi periodicals , Vama and Saptahik Hindustan for the Times of India and the Hindustan Times group respectively.
She has worked in the visual media as Editor- Anchor for Hindi news in NDTV and also India’s public broadcaster, Doordarshan.
In 2000, Pande became India’s first woman Chief Editor of a multi edition Hindi daily, Hindustan (Hindustan Times Group). She was also the first woman to be Secretatry General of the Editors’ Guild of India . She is the founder President of the Indian Women’s Press Corps , a national body of India’s women journalists .
Pande has been a member of the Bill and Melinda Gates Foundation in India and also a member of the National Board for Film Certification. She was a member of the group that prepared Shramshakti , India’s first documentation of the status and lives of women workers in the unorganised informal sector . The report, Shramshakti, was published in 1989 .
After her retirement in 2009 , from the print media, she was appointed Chairman of India’s national broadcaster , Prasar Bharati in 2010. She completed her term in March 2014.
Currently she is Group Editorial Advisor to The National Herald Group . She is also an honorary member of the Board of Trustees for the Wild Life Foundation of India and associated with The Media Foundation, an NGO that monitors media and launched the online site, The Hoot. Pande has been writing in both Hindi and in English . Her work covers fiction , plays , and essays on contemporary India and its women and a study of India’s rural women and their sexual and reproductive lives . She was awarded the Padmashree in  2006 for her services in the field of journalism .
She is married with two daughters and lives in Delhi with her husband.

Ira Pande and Mrinal Pande in conversation with Devapriya Roy

A vivid and loving homage to a legendary institution. By the late author and Padma Shri awardee, Shivani, Amader Shantiniketan, originally written in Hindi, is a moving tribute to the spirit of Shantiniketan. Translated into English by her daughter Ira Pande, the memoir provides rare insights into the Ashram, its students and the eminent personalities associated with it, including Rabindranath Tagore, Satyajit Ray and Pandit Hajari Prasad Dwivedi. Gaura Pant 'Shivani' was among the foremost Hindi writers of her generation. Her literary output spans some 40 works and bears the deep imprint of both Kumaon and Bengal. In a powerful session of nostalgia and remembrance, her daughters Ira and Mrinal Pande speak to author Devapriya Roy about the warmth and deep roots of Shantiniketan and its powerful impact on generations of writers, intellectuals and poets.
Watch Now