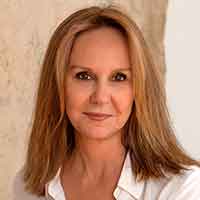 María Dueñas (Puertollano, Ciudad Real, 1964) is a doctor in English Philology. After two decades dedicated to academic life, she burst into the world of literature in 2009 with El tiempo entre costuras (The Time in Between) , the novel that became an editorial phenomenon and whose television adaptation by Antena 3 achieved numerous awards and a spectacular success of audience. His later works, Misión Olvido (2012) (The Heart Has Its Reasons), La Temperance (2015) (The Vineyard) and Las hijas del Capitán(2018) (The Captain's Daughters), continued to captivate readers and critics alike. Translated into more than thirty-five languages and with millions of copies sold around the world, María Dueñas has become one of the most esteemed authors both in Spain and in Latin America. Sira (2021) is her fifth novel.

The Time in Between: Sira and Beyond

Spanish academic and writer María Dueñas' latest novel, Sira, a sequel to her award winning book and adaptation, The Time in Between, is an ode to powerful and charismatic women and the sacrifices they made during the decades of the Second World War. In conversation with Òscar Pujol, Dueñas discusses her writing journey and inspirations.