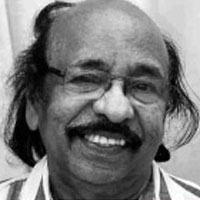 K. Satchidanandan is a Malayalam poet, bilingual critic, essayist, playwright, travel writer, fiction writer and translator. He was earlier Professor of English and Secretary, of the Sahitya Akademi and has authored 60 books, including 25 collections of poetry. His collections of poetry have appeared in more than 20 languages, including Arabic, Chinese, English, French, German, Irish, Italian and Japanese besides most major Indian languages. He has won 52 awards for poetry and overall literary contribution, including the Sahitya Akademi award, Kerala Sahitya Awards (five times in five genres), the Ezhuthachan Award, the highest government honour for a Malayalam writer, the Kuvempu Award, the Upendra Bhanja Award, the Gangadhar Meher Award, Kusumagraj Award, the Bombay Tata Litfest Poet Laureate Award, the International Poetry for Peace Award from the government of the UAE, Knighthood from the government of Italy and the Indo-Polish Friendship Medal. He has lectured and read his poetry in several festivals and book fairs across the world and was in the Ladbroke list of the first ten probable Nobel Prize winners in 2010 and 2011.

Here he comes, Moustache of Kaipuzha

S. Hareesh and Jayasree Kalathil in conversation with K. Satchidanandan

Originally published in Malayalam as Meesha, S. Hareesh’s Moustache is a novel of epic dimensions and a contemporary classic mixing magic, myth and metaphor. Here, the Hareesh and his award-winning translator Jayasree Kalathil speak with the renowned poet K. Satchidanandan about the work's deep roots in the history, geography, politics and folklore of the Kuttanad region, and how the fabulous is sometimes the truest way to depict real lived experience.