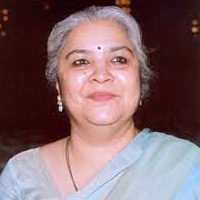 Ira Pande started her career as a University lecturer and taught for about 16 years in the Panjab University in Chandigarh. In 1990, she shifted to Delhi and since then has been writing and editing in various capacities. A short stint in the Indian Express was followed by an assignment as Assistant Editor of Seminar. From here, she went on to become the Editor of a book review journal called Biblio and took to writing freelance articles and book reviews regularly.
She has also worked as Managing Editor of Dorling-Kindersley, a publishing house that is well-known for its illustrated knowledge books and travel guides. This was followed by a stint as Chief Editor of Roli Books.
She was the Chief Editor of the Publications Division of the India International Centre for close to six years and edited several volumes of the IIC Quarterly.
Pande is also a writer and translator and her book on her mother, the famous Hindi writer Shivani, was published by Penguin-India in 2005. Titled Diddi: My Mother’s Voice, it was shortlisted for the Hutch-Crossword Award for the best non-fiction work of that year. She translated Manohar Shyam Joshi’s novella, T-ta Professor, which won the 2009 Vodaphone-Crossword award for the best translation that year as well as the Sahitya Akademi Award in 2010.
She has done the English translation of Shivani’s Apradhini: Women Without Men, a collection of her mother’s writings on women. Published by HarperCollins-India, it is a collection of interviews with jailed women, along with some portraits and short stories of women who lived life on their own terms.
Pande has also translated Prabha Khaitan’s autobiography, Anya se Ananya, from Hindi into English as A Life Apart. Published by Zubaan-Penguin, it was released at the 2013 edition of the Jaipur Literature Festival.
Her latest work, another translation, is titled Amader Shantiniketan, a memoir on Tagore's famous Ashram by her mother Shivani, who spent almost a decade there from 1935 to 1944.
Ira also writes a regular column for the Tribune.

Ira Pande and Mrinal Pande in conversation with Devapriya Roy

A vivid and loving homage to a legendary institution. By the late author and Padma Shri awardee, Shivani, Amader Shantiniketan, originally written in Hindi, is a moving tribute to the spirit of Shantiniketan. Translated into English by her daughter Ira Pande, the memoir provides rare insights into the Ashram, its students and the eminent personalities associated with it, including Rabindranath Tagore, Satyajit Ray and Pandit Hajari Prasad Dwivedi. Gaura Pant 'Shivani' was among the foremost Hindi writers of her generation. Her literary output spans some 40 works and bears the deep imprint of both Kumaon and Bengal. In a powerful session of nostalgia and remembrance, her daughters Ira and Mrinal Pande speak to author Devapriya Roy about the warmth and deep roots of Shantiniketan and its powerful impact on generations of writers, intellectuals and poets.
Watch Now