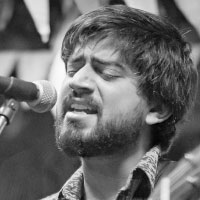 Harpreet is a versatile artiste who sings original musical compositions in Hindi, as well as in Punjabi, Bengali, Assamese, Rajasthani and Haryanvi. Trained in Hindustani classical music, he plays both the guitar and flute. His talent fuses both the modern and traditional when composing tunes to his own lyrics and for classical poetry that he loves. He is best known for creating musical scores to the works of poets such as Kabir and Bulleh Shah. His original composition Kutte (dog), a song about a canine’s view of human life, was selected by Bollywood film director Dibakar Banerjee and Kanu Behl for the film Titli. Some of his yet-to be-released compositions, Geet Aur Shabd, Kho Gaye He Wo and Sonapani, have received wide appreciation.