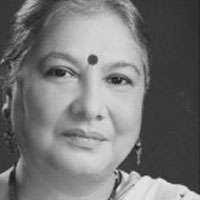 Arupa Patangia Kalita has been reckoned as one of the most powerful voices in contemporary Assamese literature. She is a bold and acutely aware chronicler of her time. A teacher of English literature, she has also translated Toni Morrison’s The Bluest Eye into Assamese. She has published more than 15 books besides numerous works in vernacular magazines and many of them have been translated into different Indian languages and English. The English translation of her novel Felanee was shortlisted for the Crossword Book Award. She has received the Bharatiya Bhasha Parishad Award in 1995, the 1998 KATHA Award, the Sahitya Sanskriti Award in 2009, Lekhika Samaroh Sahitya Award in 2011 and, most recently, the 2014 Sahitya Akademi Award.

Arupa Patangia Kalita's fiction is a chronicle of the disturbing and searing history of decades-long aggression and hate that plagued Assam. In conversation with her translator Ranjita Biswas alongside author Aruni Kashyap, she speaks about the surreally beautiful landscape of Assam, the conflict that scarred it and the role of a writer in fraught times.