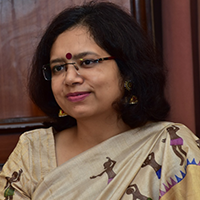 Anu Singh Choudhary is a screenwriter, translator and filmmaker. An award-winning journalist, she has written extensively across formats, including radio, TV, films and new media, and has written and produced documentaries and web-series. The author of Neela Scarf (a collection of short stories), Mamma Ki Diary (a memoir) and Bhali Ladkiyaan, Buri Ladkiyaan (a novel), Choudhary has also translated over 20 well-acclaimed titles from English to Hindi. As a screenwriter, she has co-written the web-series Aarya and Grahan (Disney+Hotstar) and has co-produced Alma Matters: Indise the IIT Dream (Netflix).

The language of music transcends all other languages. Yatindra Mishra’s book, Akhtari: The Life and Music of Begum Akhtar, has been sourced both from the original English and translations from Hindi. Akhtari Bai Faizabadi, or Begum Akhtar as she was better known, was among the greatest Indian singers of the last century. An anthology steeped in essays on her life and music, as well as remembrances by those who knew her well including icons such as Bismillah Khan, Kunal Ray, Lata Mangeshkar, Rita Ganguly, Saleem Kidwai, Shanti Hiranand, Sheila Dhar, Shubha Mudgal, Yogesh Praveen, Yunus Khan and others along with interviews with the legend herself. Mishra and Maneesha Taneja have woven together an ultimate tribute to this doyan of ghazals. In conversation with celebrated author and screenwriter Anu Singh Choudhary, they take us on an evocative journey through the life and times of an extraordinary woman.

Anukrti Upadhyay – critically-acclaimed author of 'Daura', 'Bhaunri' and 'Japani Sarai' – is that rarest of writers, working with equal ease across languages, including Hindi and English. She speaks with celebrated author and screenwriter Anu Singh Choudhary, who too writes widely in Hindi and English, about what it means to work, imagine, and create through different languages and mediums. They also discuss Anukrti's new English novel 'Kintsugi', set between Jaipur and Japan as well as the mega-successful web series 'Aarya' co-written by Anu Singh Choudhary.