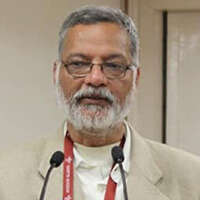 AJ Thomas is a poet, fiction writer, translator and editor who writes in English and has more than 25 books to his credit. He was Editor of Indian Literature, and is its Guest Editor now. He taught English in Benghazi University, Ajdabiya Campus, Libya from 2008 to 2014.  He was also a Senior Consultant at IGNOU. He is a recipient of the Katha Award, the AKMG Prize, which enabled him to tour USA, UK and Europe in 1997 and the Vodafone Crossword Award in 2007. He won a Senior Fellowship,  from the Department of Culture, Govt. of India and was an Honorary Fellow, Department of Culture, Government of South Korea. He has been invited as a Guest Speaker in writers’ conferences and readings in South Korea, Australia, Thailand, Hong Kong and Nepal.

Writer and former diplomat M. Mukundan’s acclaimed book, Delhi: A Soliloquy, is an evocative and unflinching look into the lives of Malayali migrants in post partition New Delhi, grappling with the questions of identity, poverty and nostalgia. Co-translated from Malayalam to English by Fathima E.V. and Nandakumar K., the book is an ode to Delhi and its deeply imbibed spirit of survival in times of war and peace. Mukundan worked in Delhi for forty years as a Cultural Attaché at the French Embassy. His award-winning books include On the Banks of the Mayyazhi and Kesavan’s Lamentations. Award-winning writer and translator E.V. Fathima has translated Subhash Chandran’s Manushyanu Oru Amukham as A Preface to Man. She was the translator-editor of the Indian Ink Mag. This book is Editor and Translator Nandakumar K’s first published translation from Malayalam. In a conversation with AJ Thomas, they explore the roots of this Malayalam classic and the process of its translation.
Watch Now