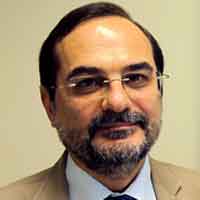 Oscar Pujol studied Sanskrit at the Banaras Hindu University. He has published several books and translations from the Sanskrit classics and the two Sanskrit dictionaries: the Sanskrit-Catalan and the Sanskrit-Spanish. In 2002, he helped in establishing Casa Asia (Barcelona). He founded in 2007 the Instituto Cervantes at New Delhi.

The Time in Between: Sira and Beyond

Spanish academic and writer María Dueñas' latest novel, Sira, a sequel to her award winning book and adaptation, The Time in Between, is an ode to powerful and charismatic women and the sacrifices they made during the decades of the Second World War. In conversation with Òscar Pujol, Dueñas discusses her writing journey and inspirations.