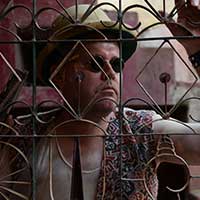 Zac O’Yeah is best known as the author of the Majestic Trilogy of novels, comprising of Mr. Majestic! Hari: A Hero for Hire and Tropical Detective, which are set in Bengaluru where he lives. Since his debut in 1995, he has published 19 books, including several fiction and non-fiction bestsellers as well as contributing quirky stories to nearly a hundred newspapers and magazines the world over (well 98 to be truthful). His writings have been translated into more than 20 languages, included in numerous anthologies such as The Best Asian Travel Writing 2020, and also short-listed for literary honours such as the top Swedish award, the August Prize for the Best Nonfiction Book of 2008. He has worked in the pop music business and in theatrical arts as a performer, manager, scriptwriter and composer. His most recent job is as lead vocalist for Swedish cyberpunk-disco orchestra The Ändå. His next book, the first volume of his spectacular memoirs, will be out later this year.

A loving tribute by a son for his mother. Ernest Van Der Kwast’s book, Mama Tandoori, brings together the author’s multicultural household with its humour and eccentric Indo-Dutch union. Painting a moving portrait of a family’s aspirations and search for identity in the face of personal tragedy, the narrative surrounds Van Der Kwast’s overbearing mother, her iron will, undying spirit and talent for haggling! Van Der Kwast is also the author of Sometimes Things Are Better When People Applaud, The Ice-Cream Makers and Giovanna's Navel. His most recent book is Ilyas. His playful eccentricities, marked by wit and satire, pulse through his writings that masterfully evoke raw undertones of emotion. In conversation with author, translator and musician Zac O'Yeah, he gives us an enduring glimpse into his family and the power of the rolling pin that held them all together.