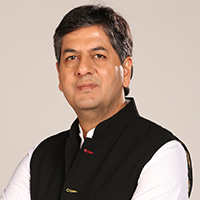 Vikram Chandra is the founder of Editorji Technologies - a start-up that seeks to transform video news through innovation in user experience, using artificial intelligence. In his earlier avatar, Chandra was one of India's best-known TV news anchor, presenting shows like The Big Fight, 9 o’clock News and Gadget Guru together with programmes for social transformation such as the Cleanathon, Greenathon and Save our Tigers. He has helped pioneer innovations such as news on mobile phones, the live streaming of video on the internet and the first major news app in India. Chandra has been named ‘Global Leader for Tomorrow’ by the World Economic Forum in Davos and has won the Indian Television Academy Award for ‘Best Anchor for a Talk Show’, the Hero Honda Award for Best Anchorperson and the Teacher's Achievement Award for Communication, along with featuring in the top 20 on the Impact list of the Digital Power 100. He was educated at Oxford University and St Stephen’s College, before attending the Mass Media Institute at Stanford University.