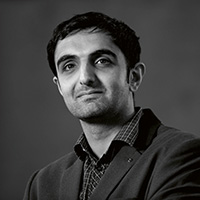 Sunjeev Sahota is the author of Ours Are the Streets and The Year of the Runaways, which was shortlisted for the Man Booker Prize and the Dylan Thomas Prize, and was awarded a European Union Prize for Literature. In 2013, he was named one of Granta’s twenty Best of Young British Novelists of the decade. He lives in Sheffield, England, with his family.

British novelist Sunjeev Sahota's recent novel, China Room, follows the intertwined stories of the brides of three brothers in Punjab in 1929 and a young man from England who travels to their now deserted farmland in 1999. Traversing through the fabric of time, segregation and empire, the tale explores a family’s trauma and one man’s attempts at breaking free from addiction and racism and his consequent search for home. In conversation with journalist and broadcaster Georgina Godwin, Sahota explores the lives of these prisoners of circumstance and their pursuit of freedom.

Sahota’s books include Ours Are the Streets and the Man Booker and International Dylan Thomas Prize shortlisted The Year of the Runaways. He was the winner of the 2017 European Union Prize for Literature. Broadcast journalist Georgina Godwin is the Books Editor for Monocle 24 and a regular host of current affairs programmes and cultural shows for various media outlets.