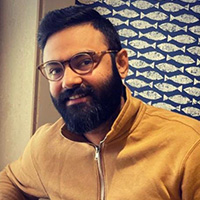 The history of Indian Cinema and its deep roots in the Bombay of yore is a fascinating saga of romance and adventure, creativity and entrepreneurship. A nostalgic look at Bollywood before it became Bollywood with a stellar panel that examines the grit and glamour of the early days of the film industry.

Kishwar Desai is an award-winning author and playwright who writes both fiction and non-fiction. Her books include The Longest Kiss: The Life and Times of Devika Rani, Darlingji: The True Love Story Of Nargis and Sunil Dutt. Movie studio executive, film historian and writer Maharsh Shah's first book, part of a  trilogy, is  Zoravar: Book One in the Bollywood Saga. Multifaceted film critic, writer and translator Bhawana Somaaya’s books include Letters to Mother, Once Upon a Time in India: A Century of Indian Cinema and Bachchanalia: The Films & Memorabilia of Amitabh Bachchan.