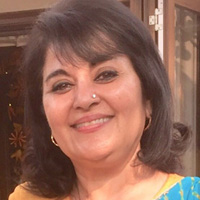 Kishwar Desai is an award-winning author and playwright who writes both fiction and non-fiction. She worked in television as an anchor and producer for over 20 years before becoming a writer. She is the chairperson of The Arts and Cultural Heritage

Trust that set up the world’s first Partition Museum at Town Hall, Amritsar. She also helped to install the statue of Mahatma Gandhi outside Westminster in the UK. Desai is the author of Darlingji: The True Love Story of Nargis and Sunil Dutt. Her novel Witness the Night won the Costa First Novel Award in the UK in 2010, and was followed by two others: Origins of Love and Sea of Innocence. The trilogy featuring Simran Singh has since been optioned for a web series. Desai’s first work of political non-fiction, Jallianwala Bagh: The Real Story, won critical acclaim and inspired exhibitions on the massacre in India, the UK and New Zealand. She also wrote a play, Manto! which won the TAG Omega award for Best Play in 1999. Most recently, in 2019, her play, Devika Rani: Goddess of the Silver Screen, was successfully staged in venues across India.

The history of Indian Cinema and its deep roots in the Bombay of yore is a fascinating saga of romance and adventure, creativity and entrepreneurship. A nostalgic look at Bollywood before it became Bollywood with a stellar panel that examines the grit and glamour of the early days of the film industry.

Kishwar Desai is an award-winning author and playwright who writes both fiction and non-fiction. Her books include The Longest Kiss: The Life and Times of Devika Rani, Darlingji: The True Love Story Of Nargis and Sunil Dutt. Movie studio executive, film historian and writer Maharsh Shah's first book, part of a  trilogy, is  Zoravar: Book One in the Bollywood Saga. Multifaceted film critic, writer and translator Bhawana Somaaya’s books include Letters to Mother, Once Upon a Time in India: A Century of Indian Cinema and Bachchanalia: The Films & Memorabilia of Amitabh Bachchan.