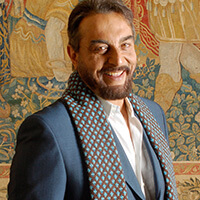 Kabir Bedi’s credits include starring with Michael Caine in Ashanti and Roddy McDowell in Thief of Baghdad and playing the title role in the Italian film The Black Pirate (Il Corsaro Nero). On American television, he has acted in Highlander, Murder She Wrote, Magnum, PI, Dynasty and many HBO mini-series. On stage, he starred in John Murrell’s Taj at the Luminato Festival in Canada and MM Kaye’s Far Pavilions in London’s West End. In India, he has done close to 70 Bollywood films, famously starring with Rekha in Khoon Bhari Maang. Bedi lives with his wife Parveen Dusanj, a producer, in Mumbai.

Stories I Must Tell

Charismatic actor Kabir Bedi's candid and moving memoir, Stories I Must Tell: The Emotional Life of an Actor, is a compelling account of his turbulent professional and personal life. From the fascinating love story of his legendary parents to his own intense relationships with the late Protima Bedi and Parveen Babi and his marriage to Parveen Dusanj, he shares insights into the rollercoaster of his life and the lessons he has learnt. Bedi's career includes roles in Ashanti, Thief of Baghdad and Khoon Bhari Maang, among others. In a compelling conversation with film critic Mayank Shekhar, Bedi talks about the stories behind the stories and the sources of his inspirations and beliefs.