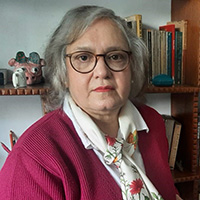 Jayanti Naju Seth recently retired as Head of the Department of English, Jesus & Mary College after a career spanning forty years. Dr. Seth’s areas of interest are the modern novel as well as autobiographical writing. Her reading of Irish literature began while studying at Trinity College, Dublin, and has continued up to the present. Her Masters at the University of Kent at Canterbury was specifically in 20th Century American and British Literature. She has edited and published two collections of essays on Shakespeare’s The Merchant of Venice and on Marquez’s Chronicle of a Death Foretold respectively.

Fiction as Resistance to the Un-making of India

A glimpse into the inspirations and creativity of an outstandingly courageous and eloquent storyteller. Nayantara Sahgal’s early memoir Prison and Chocolate Cake was published in 1954. She has written more than 18 books and novels in a career spanning over six decades. Her life has been marked by idealism and a commitment to her beliefs. She remains a prolific writer with recent novels that include The Fate of Butterflies and When The Moon Shines By Day. In conversation with Jayanti Naju Seth, Sahgal examines her writing and the essence of her recent work.