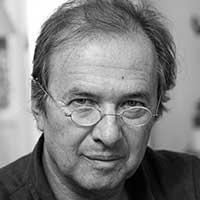 Javier Moro made headlines in India when he published The Red Sari in 2013, which tells the story of the Gandhi family through the eyes of Sonia Maino. Before even being translated, the book was a scandal. Still today, nobody knows why. Moro, one of the most acclaimed and widely read Spanish novelists, has written extensively on India: The Jaipur Foot, The Mountains of the Buddha, Five Past Midnight in Bhopal (with Dominique Lapierre) and Passion India. He was awarded the Premio Planeta in 2011, the Spanish language’s most prestigious award, for El Imperio eres tú, (You Are the Empire), the story of Brazil’s first emperor and the making of the Brazilian nation. In 2015, he published A flor de piel (Under the Skin), the tale of the Spanish expedition which delivered the newly discovered smallpox vaccine to the New World, a book that has met a new success in this time of pandemic. In 2018, he was awarded the Premio Primavera de Novela for his novel Mi Pecado (My Sin). In 2020, he published A prueba de fuego (Fireproof), the story of the architect Rafael Guastavino.

A Passion for India: Javier Moro

A glimpse into the inspirations and journeys of celebrated Spanish writer, producer and scriptwriter Javier Moro and his unique relationship with India. Through a literary career spanning over two decades, Moro has often constructed narratives inspired by the country's rich socio-cultural roots. He is the author of Passion India, a narrative that follows the marriage of a Spanish girl to the Maharaja of Kapurthala and the subsequent scandal that shook British India. His book Red Sari: A Dramatised Biography of Sonia Gandhi unfurls the inspirational path of the Gandhi matriarch and her journey through the Indian political and social landscape. Moro has also co-authored Five Past Midnight in Bhopal with Dominique Lapierre. Weaving together the conflict between good intentions, profit motive and cost cutting omissions, the book explores the horrific industrial disaster that shook Bhopal and the subsequent events that unfolded. In conversation with Mohini Gupta, Moro discusses the essence of his writing process and inimitable style.