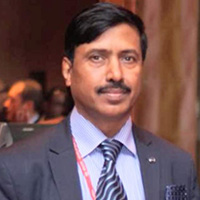 GR Raghavender is a civil servant from the Central Secretariat Service (1988). He has served as Joint Secretary, Department of Justice, Ministry of Law and Justice since January 2017. He is Mission Director for the National Mission for Justice Delivery and legal reforms. He is driving policy reforms for improving Enforcing Contracts parameters under the Ease of Doing Business and eCourts Project. Earlier, Raghavender was Joint Secretary in the Department of Industrial Policy and Promotion, Ministry of Commerce and Industry. There, he also held additional charge of Director General, National Productivity Council  from December 2015 to May 2016. He is the former Registrar of Copyrights of the Indian Copyright office. He played a key role in the introduction of the recent amendments to the Copyright Act in 2012 and the Copyright Rules, 2013. He attended many WIPO SCCR meetings and FTA negotiations as a member of Indian delegation. He made significant contributions to recently concluded two WIPO treaties namely, Beijing Treaty on Audiovisual Performances, 2012 and Marrakesh Treaty to Facilitate Access to Published Works for Persons Who Are Blind, Visually Impaired, or Otherwise Print Disabled, 2013. He has contributed in revision of the copyright legislations of Bhutan, Kampuchia, Myanmar and Nepal as a copyright expert. As a resource person he gives lectures/talks on Copyrights and Related Rights at various international and national seminars and workshops organized by WIPO and by several law schools and institutes all over India.  He is currently  pursuing a PhD (IPRs) from GGSIP University, New Delhi. He holds several degrees and post graduate degrees namely, a Masters in Development Studies (Public Policy and Management) from the Institute of Social Studies, the Hague, the Netherlands, a Masters (Gold medalist) and M.Phil (Ancient History and Archaeology) from Osmania University, Hyderabad. He was a JRF Scholar of UGC as well. He holds an LLB degree from Delhi University and LLM (IPRs) from GGSIP University, New Delhi.He also holds a Bachelor's degree in Library and Information sciences (BLSc) and a BSc degree from Osmania University, Hyderabad.