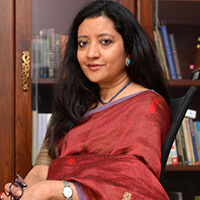 Ghazala Wahab started FORCE in August 2003 along with Pravin Sawhney. She is the co-author of Dragon on our Doorstep: Managing China Through Military Power (with Pravin Sawhney) and author of Born a Muslim: Some Truths About Islam in India. Apart from writing on issues like homeland security, terrorism, Jammu and Kashmir, Left-Wing Extremism and religious extremism, Wahab is responsible for the overall production of the magazine every month. Working closely with contributors, advertisers and designers, she wears multiple hats to ensure that no issue of FORCE misses its monthly deadline. She also writes a monthly column, ‘First Person’, in FORCE. From 2003-1998, she worked as a principal correspondent in the Delhi bureau (features) of The Telegraph newspaper focussing on subjects like terrorism, communalism, international refugees and internally displace people, and insurgency. She also contributed a chapter on the changing profile of terrorism in Jammu and Kashmir for the book Operation Parakram, authored by Pravin Sawhney and Lt Gen. V.K. Sood. She started her career in journalism with The Asian Age newspaper in 1994, where apart from routine reporting and sub-editing, she brought out a weekly defence and security page.

Born A Muslim: The Population Myth

SY Quraishi and Ghazala Wahab in conversation with Pragya Tiwari

Presenting a compelling and detailed account of the Muslim community in India, SY Quraishi and Ghazala Wahab unravel the politicisation of their faith from two different frontiers. Quraishi's latest book, The Population Myth: Islam, Family Planning and Politics in India,critically analyses the attempts at stoking majoritarian fear around the supposed exponential growth of the Muslim population. Based on impeccable research of the Quran and the Hadith, the book highlights that Islam is one of the first religions in the world to advocate smaller families. Wahab's latest book, Born A Muslim: Some Truths About Islam in India, follows the evolution of Islam through the region while delving into the reasons behind the staggered socio-economic and intellectual growth of Indian-Muslims. Weaving together personal memoir, history, reportage and scholarship the book unravels the stigma around the community and the roots of their vulnerability and insecurity. In conversation with writer and columnist Pragya Tiwari, they present an eye opening account of one of the most diverse communities in India.