It was in 1971 when Irving Finkel was told a spine-chilling tale of a ghost that his lifelong friend had seen when he was 7 years old. And as Finkel writes in his book, this story made a lasting impression on him and ever since then, he has hoped to witness a ghostly experience but never has! However, he surely has embarked upon an ancient ghost hunt to dig out the most fascinating stories and ideas that revolve around ghosts and has written about them in ‘The First Ghosts: Most Ancient of Legacies’.

“It’s called ‘The First Ghosts’ but there is a subtitle, which is ‘Most Ancient of Legacies’…that is half the point in writing it, to show how far back in time the idea and the belief in ghosts extends and how globally throughout the world!” said British philologist Finkel to historian Nayanjot Lahiri during their discussion at the Jaipur Literature Festival 2022. For Lahiri, this book was one of the most unusual and fascinating works to feature during the Festival.

Working at the British Museum, Finkel’s job requires him to read cuneiform tablets from ancient Mesopotamia. “This is the oldest writing we have, so far, in the world!” noted Finkel. From about 1800 BC, one begins to see an increasing number of tablets that deal with the subject of ghosts. Finkel claimed that a number of them were written by exorcists who helped people get rid of ghosts when they were being troubled by them! He also talked about ghosts being a “truly ancient matter” – his research shows how humans have engaged with the question of ghostly beings since a very long period of time.

The discussion got more engrossing when Lahiri brought up the Harappan Civilisation and noted that the people of the Indus Valley removed the bodies of their dead from living areas - with some being cremated and others being buried in graves at the edge of settlements. But these traditions were not shared by the early hunter-gatherers in the Gangetic Plains, who buried the dead very close to their homes “with ornaments, and tools and pieces of red ochre”. Lahiri also talked about the fear of the dead rising and mentioned the chalcolithic site of Inamgaon, where most of the adult skeletons had their lower extremities chopped off below the ankle. “...those who were still living above did not at all relish the possibility of those hidden below deciding to take a walk, if I may say so!” said Lahiri.

Finkel told Lahiri that in ancient Mesopotamia, one witnesses ghosts being viewed from a sympathetic lens. Many realised that if ghosts were rising up, they possibly had a grievance. But there were instances when dangerous ghosts with malicious intentions rose up, then a professional was called to perform a ritual that would lead to the return of the ghost to the underworld.

Ghosts, Finkel added, were seen as people that they were when they were still alive and hence it was believed that just like humans, ghosts too had different qualities and characteristics - their presence wasn’t always bad news! Some could be ineffective, some were shy but some of them were really nasty - unpleasant enough to enter inside somebody’s ear and be so destructive that it could upset the person’s mind and health. However, amulets could be used to defend oneself against menacing spirits. ‘Mumbo-jumbo’ or unintelligible words on amulets also possessed the possibility to make ghosts nervous or jumpy!

The very idea of amulets being used may remind one of the charms and objects that people utilise across traditions in order to protect themselves against ghostly entities - we can think of the symbols, rings, bracelets and objects that many use in India to ward off ‘evil spirits’. More similarities were drawn when Finkel noted that the basic message, universally, is that “...when people pass away…we don’t see them again but when they do come back, it’s because they are unhappy”. To this, Lahiri said that in North India, the most “dreaded of the spirits is what is called a chudail” - a woman who has left the world with unsatisfied desires. She also added that terms like bhoot and pret have been mentioned in some of the old Indian texts.

As the captivating conversation drew to its end, Finkel said that in ancient Mesopotamia, society was not divided between people who believed in ghosts and those who didn’t. “That dichotomy did not exist…people did not either believe or disbelieve in ghosts…they took them for granted, they were part of real life!” said Finkel. The last part of the discussion focused on the presence of the Witch of Endor in the Book of Samuel and how she was asked by King Saul to call up the spirit of Prophet Samuel. Finkel concluded that the story flows such  that one can see how the presence or the existence of ghosts was not questioned! 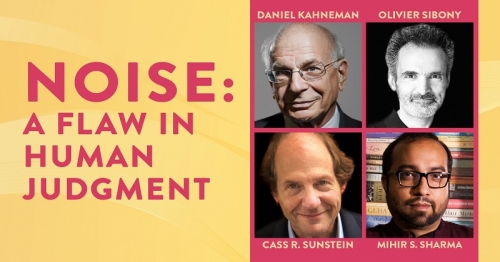