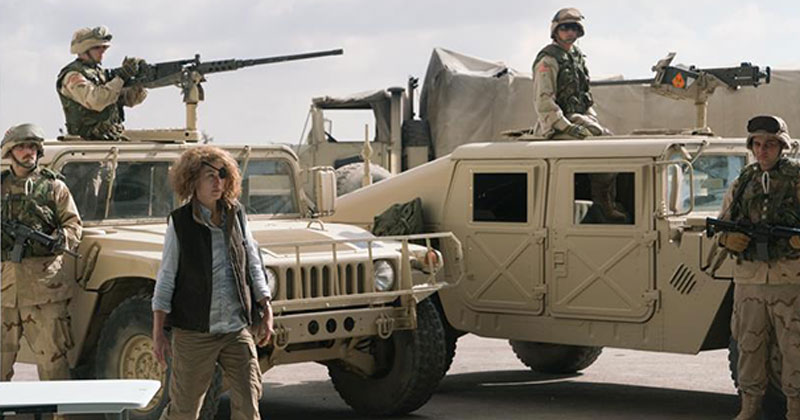 In Extremis: The Life of War Correspondent Marie Colvin

In Extremis: The Life of War Correspondent Marie Colvin

Lindsey Hilsum's In Extremis begins with a dinner in Beirut where she and Marie Colvin debated the merits of entering Syria in early 2012. Hilsum decided that the level of risk was too high. Colvin did not. Soon after, Colvin had been killed along with French photojournalist Remi Ochlik, amidst shelling by the Assad regime of Homs. Due to Colvin’s death, The Sunday Times, the paper for which Colvin had worked and which had over the previous years pursued a high-risk strategy in conflict reporting announced that it would no longer be accepting commissions from freelancers working inside Syria. In recent years, Colvin's death has been memorialised in two films; the documentary Under the Wire, based on a book by Paul Conroy, and the Hollywood adaptation A Private War. Lindsey Hilsum's memoir In Extremis is another attempt at dealing with this legacy and in its biography, attempts to disentangle the myth of Marie Colvin- a myth which she at times participated in the creation of- from the reality of her correspondence on the ground.

Colvin was distinguished as a journalist by her willingness to put herself through more than her colleagues; in Hilsum's words, “She always went in farther and stayed longer.” In part, this is a biography aimed at getting to the bottom of why Colvin would subject herself to these risks, daring even by the standards of other war correspondents. Colvin is a scriptwriters’ dream. In addition to her bravery in the face of fire, she lived a life where she drew people in by the power of her charisma- Marie Brenner talks of how “guerrilla fighters, refugees, movie stars, and writers” would appear at her parties. She also suffered from PTSD, had issues with alcohol and her relationships were unstable. The contrasts of this lifestyle have undoubtedly attracted those wishing to traffic in the myth of the tortured soul. In A Private War, scenes of her life in conflict zones are contrasted with her unsteady, often chaotic life back in London. Such portrayals run the danger of transforming Colvin's life into the status of myth. They paint a picture of a figure, that cannot save herself nor escape her own torment, ergo putting herself in deliberately dangerous situations in order to save others.

In A Private War, Colvin's refrain when she meets the injured and the suffering is “I want to tell your story”. The timing of the words is dismissed by Hilsum as a Hollywood fantasy, but their essence: that the idea of telling stories wields real power, in Colvin’s case the power to save lives, is the faith that underpins much journalism. Robert Fisk, a man who has been described as “perhaps the most famous foreign correspondent in the world” laid out his conception of what it meant to be a journalist: “At best, journalists sit at the edge of history as volcanologists might clamber to the lip of a smoking crater, trying to see over the rim, craning their necks to peer over the crumbling edge through the smoke and ash at what happens within. Governments make sure that it stays that way.”

In this model, journalism is a first draft of history, an attempt to witness and then to record the key details of the tumult of society and life, despite the best efforts of power to obscure this from view. Fisk's model sees the truth as lying with those without a voice and in doing so, rejects the idea that there are always two sides to a story and that the correct one lies somewhere in the middle.

Fisk's outlook, especially his conviction that to tell the truth is to be necessarily aligned with the side of those who are weaker, is one that Colvin shared. She would rail against the idea that there were always two sides of a story: “when you’re physically uncovering graves in Kosovo, I don’t think there are two sides to the story. To me there is a right and a wrong, a morality, and if I don’t report that, I don’t see the reason for being there.”

Colvin's willingness to take risks in pursuit of a story was not universally respected amongst her colleagues. Special correspondents work alongside teams of local staff and when correspondents make decisions, it is not just their own lives they are risking. The assault that had killed her and Ochlik was precipitated as she, against advice, had made a satellite broadcast which had allowed the regime to pinpoint her location. Jon Lee Anderson, a fellow correspondent of Colvin, writing in The New Yorker, outlines his discomfort at Colvin's tendency to take things further, and the concern that this may have been influenced by factors other than her desire to gather the story; Colvin's desire for “professional affirmation” was also wrapped up with “the sense of overwhelming loneliness that she gave off”. After her death, the Sunday Times was condemned for sending a reporter in Colvin's position, struggling with PTSD and alcohol, into a war zone.

Hilsum talks of how the attitude of the editors at The Sunday Times could encourage a myth-building that was dangerous to the correspondents it employed: “On the phone to Sean after filing, she said that she was desperate for a cigarette and a vodka martini. He added the line to the end of her story as the payoff. It became part of her legend. Marie and her editors had invented a myth for her, an identity that they promoted even when she was gravely injured.”

Colvin would make use of the mythology that sprung up around her. She fostered connections with both Yasser Arafat and Gaddafi, allowing her a level of access, especially to the former, almost unparalleled amongst her colleagues. Her staggering bravery led to some of her finest moments: when she used her presence as a Western journalist as a human shield and saved thousands of lives in East Timor. Moments such as these where Colvin's reporting directly shaped the events around her are numerous and lie throughout In Extremis. And yet, the question remains, as Anderson asks- what purpose did her death in the Baba Amr siege really serve? Over 400,000 lives have been lost in Syria since Colvin died. The War in Syria took place and was covered across the world and yet the regime still used chemical weapons in an attack on Ghouta in 2013. It now looks likely that Bashar al-Assad will remain in power after it all. These lives have been lost and the political situation remains in turmoil, despite endless acts of bearing witness by hundreds of journalists, both foreign and Syrian.

Marie Colvin was a journalist of extraordinary skill and bravery who deserves to be remembered for the work she did to prevent her conflicts. Much like how the myth of the tortured artist can obscure the very art produced, fixating on Colvin's undeniable personal struggles and seeking to understand her drive to report solely through them involves turning our eye away from the conflicts she reported.

Hilsum's book too asks the question of what role there is now for the kind of reporting which Colvin pursued so passionately: “Marie had always identified with those whose lives she touched—Palestinian youths, East Timorese refugees, Sri Lankan Tamils, and those under siege in Baba Amr. They would remember her not just as a journalist, but also as someone who crossed a boundary to live and, eventually, die as they did. “I knew her for a short period, but it was a time of life or death, so I saw something in her,” said Wa’el, who survived the rocket attack that killed Marie. “She dreamed of being a voice for the weak, and of a place where war doesn’t affect civilians. She wasn’t childish or naïve, but she was idealistic. She was a dreamer.”

Colvin saw her role as exposing the truth of civilian suffering in order to hold the powerful accountable for their acts of violence. In Extremis demonstrates the value of not mythologising the figures who pursue such goals; but at looking at how this idealism is tied in with the personalities that choose to report from the frontlines. It is both an example of a life lived in this pursuit and a warning that if we continue to see those who cover conflicts abroad as tortured souls, we obscure our own view of the very thing that these reporters are trying to show. We in turn risk losing the ability to draw apart the lines, to see beyond the necessarily self-sustaining myths and see how our reception of war journalism, often verging on entertainment, can be an act of disengagement.

Marie Colvin's reporting saved hundreds of lives from situations of human-induced horror. She died in pursuit of the goal that she had spent her career chasing, but it was her very status as a correspondent which made her a target. The question, which I have come no closer to answering is- what can we do in a world where telling the truth of civilian suffering is insufficient? What do we do when journalism does not function as a check on the system of violence? Perhaps we can hope to find some answers at the forthcoming session In Extremis: The Life and Death of the War Correspondent Marie Colvin with Lindsey Hilsum at the Jaipur Literature Festival 2020. 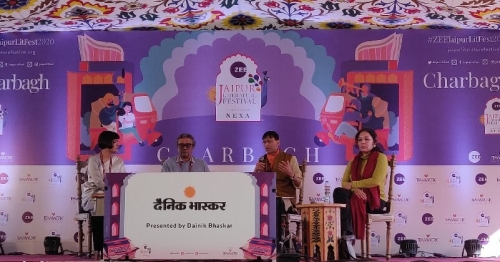 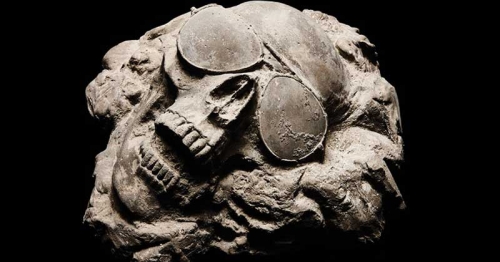 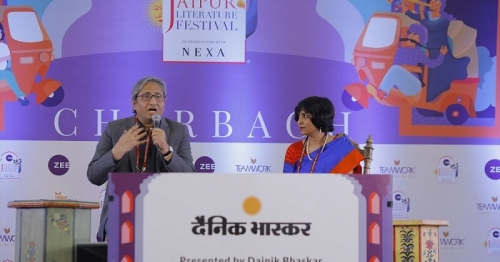 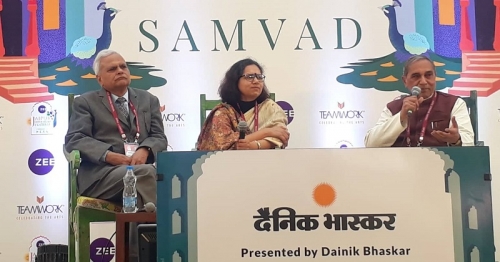